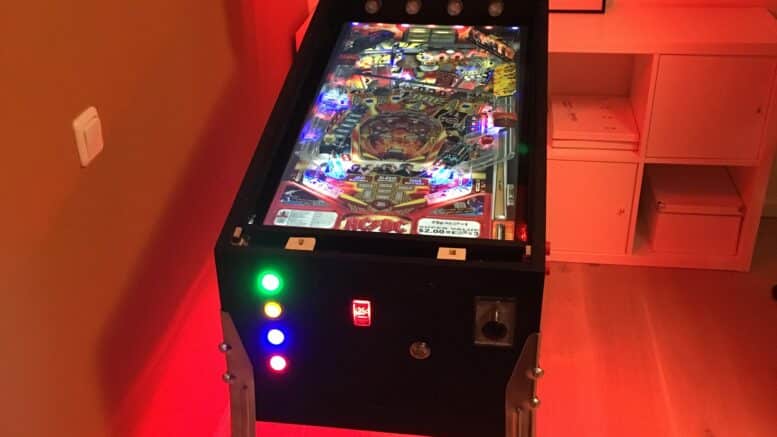 This is a detailed step-by-step on how to set up addressable RGB LED stripes in your virtual pinball machine using a Teensy 3.2 controller board.

Setting up LED stripes in my cabinet took me many hours, so I decided to put together this “tutorial” to help any fellow builders in their quest. Let me know if it is helpful 😉

I have installed two types of additional lighting effects: 5 LED flasher (more on this later) and colored RGB LED RGB stripes. These are attached to the left and right of the Playfield monitor and additionally at the bottom of the cabinet and the back of the cabinet backbox.

The effect is similar to the “ambient” effect that many large-format televisions have and which gives the image a spatial depth.

Test of the setup of the addressable RGB LED stripes with colour gradients.

RGB LED Stripes: this is the hardware you need

Basically you need RGB LED Stripes and some piece of hardware to address the LEDs on the stripes via DOF (Direct Output Framework) for each table.

In my VPin, the following setup works nicely:

“The Teensy is a complete USB-based microcontroller development system that can realize many types of projects on a very small basis. All programming is done via the USB port. No special programmer is needed, just a standard micro-B USB cable and a computer with a USB port. ” (Amazon.com)

Too late for my setup I realized that Dominik Dancsó of German Gaming Supplies provides a neat Teensy Control Box that helps with the cable management.

If you don’t like to read, I would like to recommend the following youtube video tutorial from “Mame in a Box” which covers connecting the LEDs, setup of the Teensy and DOF configuration. Simply follow it 1:1, then it should work right away.

Nevertheless I will give you a step-by-step of how to set up addressable RGB LED stripes for your virtual pinball machine:

1. Wiring of LED stripes to Teensy

The first step is to connect your LED stripes to the Teensy board.

Have a look at your LED stripes: The LED strips are one-directional in their signal flow and there is (should be) a marker with arrows to show that direction. Power and ground can be injected from any location in the strip but the signal has to come come from the starting end.

The LED strips need +5v and ground to the outer two pads (black and red).

If you are using the Octo28 adaptor you can connect a CAT6 cable plug to one of the two RJ45 sockets. The CAT6 cable has 4 twisted wires, giving you signals to 4 different stripes. As there are 2 sockets, using one Octo28 adaptor allows you to address up to 8 separate LED stripes. Which is a lot of fun.

The order of twisted pairs of the CAT6 cable is:
Orange
Blue
Green
Brown

With the solid color being the data wire and the white being the ground.

Teensy sees – as far a I can tell – the LED strips as one long continuous strip. This does not mean that you have to daisy chain the strips by sending the signal out at the end of one strip and into the beginning of another but can address them separately.

If you’ve decided where to place the stripes in you cabinet, measure and cut the long stripe in the appropriate pieces. Make sure you cut the soldering spots in half so there is enough ground for a good connection.

For the following Teensy setup you should have a test-stripe of about 50cm length (just to see effects, any length will do).

2. Setting up Teensy for LED stripes

The Teensy board connects up to your PC via USB cable so you need a cable with a regular USB on one end and a micro USB on the other (Source: Amazon.com).

The Teensy now needs to be loaded with software to run the LED strips. The instructions for doing this are available here:https://github.com/DirectOutput/TeensyStripController

As I did not get along with this, I recommend watching this part of the video tutorial and following it step by step:

Hopefully you have your LEDs glowing in beautiful colors at this point. If not, check your wiring and watch the video tutorials one more time.

3. How to Setup Teensy and DOF in a virtual pinball

The last part is about how to get the Direct-Output-Framework (DOF) of your virtual pinball machine to talk to the Teensy controller. For this, you need a Global Configuration file and a Cabinet Configuration file in your Directoutput/Config folder.

This is a copy of my Global Configuration file:

And this is a copy of my Cabinet configuration file. As there is not a lot of information available on how to set it up, it is a little tricky. To make it easy for you, I’ll add comments in bold to explain what is going on. Make sure you do not copy these comments in your XML. Otherwise you will have errors.

You are almost there: Now open the DOF online config tool, sign in and create a new config file that includes a WS2811 controller:

This is about it.

When the LED finally were running, watching the new effects on each table was a big surprise: From simple color flashing effects depending on the game situation, to running lights tracking the ball in the shooter lane to stunning lightning effects, as soon as certain targets on the playing field were hit.

In any case, the effort is worth it. In particular, the LED strips to the left and right of the playfield monitor now add visual depth to the table.

How to mount RGB LED Stripes on your virtual pinball

The following photo shows the LED strip on the backside of the cabinet backbox. The black aluminium profile was screwed onto the backbox, then a thin, double-sided foam tape was glued into the profile as insulation. The RGB LED stripe has a double sided tape on the backside and is covered by the transparent cover of the profile.

The fully assembled LED strip under the transparent protective cover of the aluminium profile:

In the parts section I’ve made a list of (most) of the parts I’ve installed in my virtual pinball and where I’ve bought them: Virtual Pinball machine parts list.

More:
How to install an analog plunger in a virtual pinball machine…

4 Comments on "Part 9: How to setup addressable RGB LED stripes in a Virtual Pinball Machine with Teensy 3.2 (step by step)"