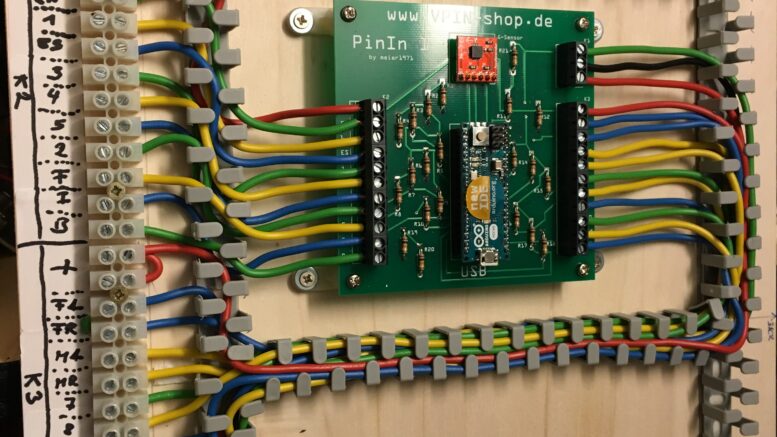 A VPin consists of a variety of electronic and electronic electromechanical components, all of which need to be wired. Buttons, solenoids (for force feedback), shakers, if necessary. LED stripes as well as pinball controller boards that control the whole machine. Wiring can become confusing pretty quick and therefore locating a missfunction very annoying.

I wanted to make sure to be able to quickly understand my wiring in months or even years from now, should it be necessary to replace a broken toy or update a board. So Quick & Dirty was not an option. I wanted it to be all neat and tidy.

In my opinion its all about deciding on the paths the cabling will take around your cabinet, then bundling your cabling together into those paths. Keep in mind that interference can happen if you bundle for instance a powercable together with an audio signal wire.

The main controllers in my VPIN are a Sainsmart 8 Relais board for force feedback (left on the foto), a PinIn 1 controller (center) as the keyboard emulator, convertor for the analog plunger as well as for nudge control (tilt function).

Missing in the foto on the right hand side is a Teensy 3.2 (USB-based microcontroller development system) mounted on an OctoWS2811 adaptor for controlling LED stripes in den cabinet. (see Part 9: How to Install RGB LED stripes in Virtual Pinball.)

Due to the large number of requests: The grey cable guides are called Richco RX1616-4 cable bundle holder 16mm (Inexpensive source: Voelkner.de). The 500mm strips can be easily cut to the required length. On the backside is a double-sided tape with which the cable guides can be impeccably fixed on dust-free surfaces.

Additional material for cable management such as cable holder, with which cables can be fixed cleanly, WAGO connection clamps as an alternative to the old chandelier clamps and cable ties en Masse are available in my experience quite cheaply at voelkner.de but certainly also in you local hardware store.

Which gauges of wire to use in a Virtual Pinball machine?

In addition to the cable rails and many cable ties, I also tried to keep track of the cables through color coding of the cables. Stranded wires with a cross-section of 1x 0.75qmm were used, which should be absolutely sufficient for the vast majority of applications in a Virtual Pinball machine. There are a variety of colours by meter at voelkner.de e.g. Helukabel 52881 Litze H05Z-K 1 x 0.75mm².

For pinball builder in the US: Two different gauges of wire are used in many of the older pinball machines: 18 gauge for general illumination, solenoid common supply, and flipper coil connections, and 22 gauge for controlled lights, switches, the switched solenoid return lines and speaker connections.

22 gauge is used for the general illumination connections to the
back box insert panel lights.  All wiring from the transformer to the power
driver board is 18 gauge, as is the wiring for interboard harnesses and dot
matrix power.

Next part:
Part 8: How to build a simple virtual pinball playfield monitor hinge…

2 Comments on "Part 7: Cable Management in a Virtual Pinball Cabinet – neat and tidy"