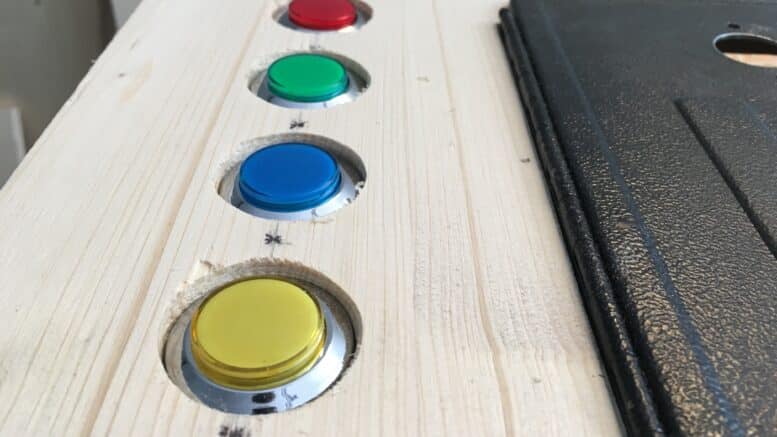 With most of the the woodwork done and pinball cabinet and pinball backbox are assembled, the next step is to install and wire the pinball buttons. My goal was to be able to control the pinball software completely without a keyboard or mouse and to achieve the most realistic experience when playing through the use of real pinball buttons and switches.

Usually, pinball software such as Visual Pinball or Future Pinball is played via a keyboard. In a virtual pinball machine, the mechanical pinball buttons and switches are wired to a “keyboard emulator,” which then simulates the keystroke as if pressed on a keyboard and returns the signal it to the pinball software.

There are a lot of pinball controllers available on the market. To name just a view:

Please see the virtual pinball machine components & parts-list for shops where to get the boards.

In my Virtual Pinball, a PinIn1 board (center) is used. The board (input only) is already a little older and does not support RGB LED buttons, but in addition to the keyboard encoder, it has a motion sensor that makes it easy to simulate a realistic tilt mechanism (nudging): Pushing against the table makes the ball deviate – or TILT!

Which Buttons to you need in a Virtual Pinball Machine?

I use the following setup in my cabinet:

Arrangement of the buttons in the cabinet with service door fitted. Below the service door you can see the on/off button for the computer. On the right, the circular cut for the 120mm intake fan (outtake in the back of the cabinet).

Mounted Virtual Pinball Leaf Switch Flipper Buttons. Due to the short thread length of the buttons, I used a 60mm Forster drill approx. 10mm deep to have enough play for the plastic nuts. Next to it is the test-mounted analog pinball plunger. More about assembling & connecting the analog plunger in Part 5: Install an analog plunger in Virtual Pinball (German only, so far).

5V LED Coin button, mounted in the service door of the Virtual Pinball. Microswitch is wired to my PinIn1 controller board.

Next photo: The service buttons (white, black, 2x red and green) within the service door e.g. for controlling the volume.

The ready-wired pinball buttons from above, including the fan and audio amplifier (left) for the speakers in the backbox. Amp accessible via the service door

Next Part:
Part 5: How to install an analog plunger in a virtual pinball machine…